This post describes our analysis of carrier-level HTTPS interception ordered by the government of Kazakhstan.

The Kazakhstan government recently began using a fake root CA to perform a man-in-the-middle (MitM) attack against HTTPS connections to websites including Facebook, Twitter, and Google. We have been tracking the attack, and in this post, we provide preliminary results from our ongoing research and new technical details about the Kazakh interception system.

What is a HTTPS interception?

HTTPS secures communication between browsers and websites by encrypting the communication, preventing ISPs and governments from reading or modifying it. Servers prove their identity by presenting certificates that are digitally signed by Certificate Authorities (CAs), entities trusted by web browsers to vouch for the identity of sites. For example, facebook.com provides a certificate to browsers that is signed by DigiCert, a CA that is trusted and built-in to virtually all browsers. Browsers can know they are talking to the real facebook.com by validating the presented certificate and confirming that it is signed by a CA that they trust (DigiCert). The certificate provided by facebook.com also contains a public cryptographic key that is used to secure subsequent communication between the browser and Facebook.

Censored Planet is a global censorship observatory operated at the University of Michigan that continuously monitors various types of network interference in over 170 countries, using a collection of remote measurement techniques. Our scanners first alerted us to the presence of a potential MitM attack occurring in Kazakhstan starting on July 20, 2019. We first detected it using a technique called HyperQuack, which works by connecting to TLS servers and sending handshakes that contain potentially censored domains in the server name indication (SNI) extension. If the response shows tell-tale signs of interference that differs from a normal handshake, the domain is marked as potentially censored in the country where the server is located. (Figure 1)

Figure 1. An example of how CensoredPlanet uses HTTPS servers to detect TLS MitM

Investigation revealed that the certificate returned in these cases was a fake one ultimately signed by the Kazakhstan root CA (Qaznet Trust Network) (Figure 2). Our experiments also showed that the censor acts as a transparent proxy. This means the censor decrypts the traffic and then encrypts it with its own key before forwarding it to the destination. 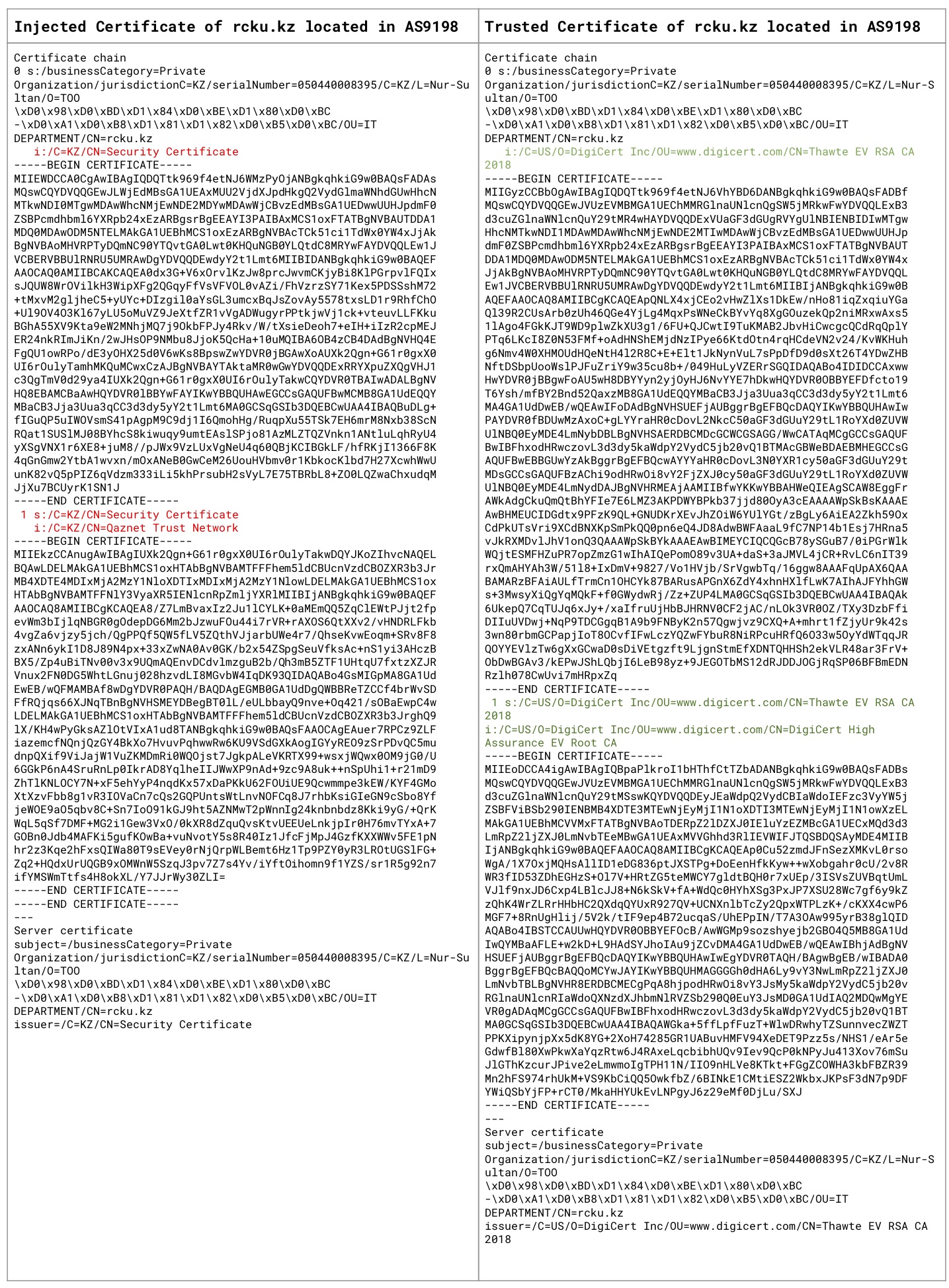 Figure 2. An example of a trusted and injected certificate from an HTTPS Server in the KazTelecom AS (AS 9198)

Our investigation also shows that connections are also only intercepted if they follow a network path that passes the interception system; however, interception occurs regardless of the direction that the connection takes along the path. This means that we can trigger the interception behavior from outside the country by making connections to TLS servers inside Kazakhstan, allowing us to conveniently perform more detailed measurements. 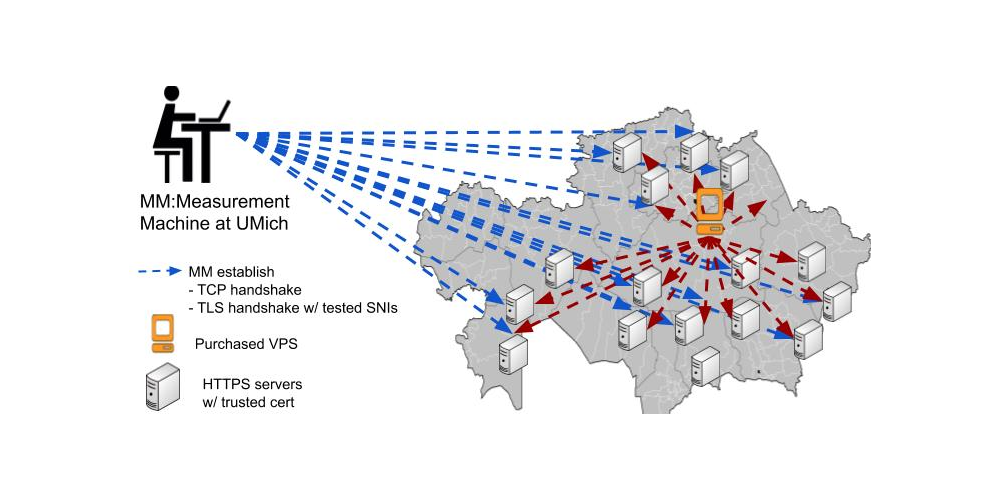 From our in-country vantage points, we only observe two instances of HTTPS interception, both from RIPE Atlas probes. Both of our VPS clients can access the affected sites (e.g. facebook.com) without any HTTPS interception, suggesting that the HTTPS interception is not universal in the country: many clients do not receive the injected certificate even when connecting to domains known to be affected.

We find several conditions that must be true for a certificate to be injected:

We note that these conditions are necessary but not sufficient: for example we have made connections that pass through AS 9198, but do not see certificate injection despite satisfying the other conditions. We are still investigating what other conditions must be met to trigger interception.

There are over 200,000 reachable TLS hosts in Kazakhstan, but only 6736 of them present a valid browser-trusted certificate according to Censys. On July 21, we performed a TLS handshake from a US-based vantage point to each of these 6736 HTTPS servers, setting the SNI to facebook.com and google.com, domains known to trigger HTTPS interception. We found only 459 servers (7.0%) had certificates injected, suggesting that Kazakhstan’s HTTPS interception is currently only happening in a fraction of the country.

We performed the same scans to the 6736 trusted HTTPS servers from one of our VPS perspectives inside the country, and found 1598 (24%) had certificates injected. While these hosts are in different locations, the path to all of these servers passed through AS 9198, suggesting this is where the HTTPS interception is occurring. Early on July 22, we noticed that interception had stopped occurring, but resumed 9 hours later. When we re-ran our measurements, we observed the number of HTTPS hosts that had certificates injected had decreased: only 300 (4.4%) from our US-vantage point, and 400 (5.9%) from our Kazakhstan VPS. This indicates that the interception system is still being tested or tuned, perhaps as a precursor to wider deployment.

To locate where the interception is happening, we employed a TTL-based technique often used in Internet measurement. For each HTTPS host where we were able to trigger interception, we made repeated connections with varying values for the IP time-to-live (TTL) field in the packet containing the SNI hostname and recorded the smallest TTL for which we received an injected certificate response. The IP TTL controls how many network hops the packet can traverse, so if we set a packet TTL to 3 hops, and do not receive any certificate injection, we know the injecting infrastructure is likely more than three network hops away from our source machine. This technique allows us to pinpoint the network location of the injection infrastructure.

We performed this type of scan from our VPS in Kazakhstan on the 1598 HTTPS hosts we measured that had certificates injected. For each host we sent two connections, one containing a TLS SNI header for facebook.com and one for an unaffected domain, and measured the first hop for which we received a response. Partway through this scan the HTTPS interception briefly stopped, but if we look at the first 1212 HTTPS hosts we scanned before the change, 99.5% showed certificate injection occurred at a hop earlier in the network path than the server. In the majority of cases, the injected certificate was sent only 3 or 4 network hops before the actual host, suggesting that the injection is occurring fairly close to the user. We confirmed similar findings from our US-based vantage point using the same technique.

Certificate injection occurred between hops 4 and 5.

The middlebox in AS 9198 that performs interception has to connect to the original TLS server in order to retrieve its legitimate certificate for validation and replacement. We used a RIPE Atlas measurement to send a TLS connection to a server we controlled, where we could capture the packets that came from the RIPE Atlas Probe’s IP. When we have the Atlas probe client set the SNI to something that doesn’t trigger certificate injection, our server sees the normal client hello sent by the RIPE Atlas probe, which has a specific TLS fingerprint. However, when we set the SNI to facebook.com, our server sees a different TLS fingerprint from the HTTPS interception device. Unlike the RIPE Atlas fingerprint, the middlebox’s TLS fingerprint is virtually unseen in normal Internet traffic. Affected domains could use this fingerprint to tell when a connection is being intercepted, and alert the user to the interception, revoke exposed credentials, or not send sensitive data to the user.

For further analysis, we provide our packet captures here (PCAPs or it didn’t happen!)

HTTPS interception is triggered by the client-sent SNI extension. Censored Planet found 37 domains out of ~10000 we tested that trigger a fake certificate to be injected. These domains are mostly social media and communication sites, and listed here:

ISPs telling users to install the Kazakhstan root certificate claim that it can help protect against fraudsters, hacking attempts, and illegal content. However, this list of domains suggests that the actual intention is instead to surveil users on social networking and communication sites.

Kazakhstan’s HTTPS interception weakens security and privacy for the country’s Internet users. Although the interception is not yet occurring country-wide, it appears the government is both willing and potentially capable of widespread HTTPS interception in the near future. The international community needs to closely monitor this alarming practice, which flies in the face of decades of progress by the computer security community towards ensuring that all websites are protected by strong, end-to-end encryption.