In this post, we describe our investigation into the global proliferation of content filtering technologies used for censorship using FilterMap, a novel framework that can scalably monitor content filtering technologies worldwide. In our study, FilterMap compiled data from Censored Planet (Quack and Hyperquack) and OONI data to gather blockpages from filter deployments. It then clusters the observed blockpages generating signatures for longitudinal tracking.

In the study, FilterMap was able to identify censorship filter deployments associated with 90 vendors and actors and observe filtering in 103 countries. We detected the use of commercial filtering technologies for censorship in 36 out of 48 countries labeled as ‘Not Free’ or ‘Partly Free’ by the Freedom House '’Freedom on the Net’’ report. The unrestricted transfer of content filtering technologies have led to high availability, low cost, and highly effective filtering techniques becoming easier to deploy and harder to circumvent.

Visit https://censorerdplanet.org/filtermap/results to see in detail the filters identified by FilterMap, their unique signatures, some example blockpages for each filter, and the countries they were identified in.

'’Dual-use’’ technologies, such as DPI-based network management and filtering, are on the rise. Filters are increasingly being used by network operators to control their users’ communication, most notably for censorship and surveillance. These products enable advanced filtering, particularly on application-layer data.

Monitoring the use of filtering technologies for censorship can drive change in the regulation and behavior of companies selling filtering products. For instance, Citizen Lab conducted investigations of a Canadian content filtering vendor Netsweeper showing how their products were employed in censorship systems around the world. The investigation, which was the result of several years of manual effort, led to changes in Netsweeper’s filtering behavior.

Measuring the deployment of filters has been a cumbersome process as it involves manually identifying a unique signature for a small set of filter products, often while having physical access to a sample product and the assistance of on-the-ground collaborators, and then performing network scans using the signatures to detect deployments. Moreover, monitoring their deployment continuously requires sustainable systems. As a result, the censorship measurement community has only identified a handful of filters over the years.

The inability to monitor the proliferation of filters more broadly withholds researchers, regulators, and citizens from efficiently discovering and responding to the misuse of these ‘‘dual-use technologies’’.

We introduce FilterMap, a framework for semi-automatically identifying filters that are configured to censor with user-observable blockpages, and we apply the technique to measure censorship filter deployments around the globe. FilterMap consists of two main phases:

In our data analysis section, we identify blockpages using two techniques, Iterative Classification and Image Clustering, on HTML content extracted from disrupted measurements in our collected data. These techniques help with generating large groups of pages that have either content similarity or visual similarity. Since filters often return the same blockpage for all undesirable content, the injected responses group in large clusters.

The clusters generated using both techniques are labeled by a HTML signature that uniquely identifies the blockpages in that cluster. FilterMap’s data collection and analysis techniques significantly reduces the manual effort in collecting and processing blockpages. We analyzed more than 379 million measurements in this study.

In our study, we conducted two kinds of measurements:

Aiming to set a high ethical standard, we discussed the study’s design with internal and external colleagues in our community and follow the best practices outlined in Quack, ZMap and the Menlo reports. For our remote measurements, we only choose vantage points known to be Organizational i.e. We do not use end-user machines for measurement. We make it easy for anyone investigating our measurement machine’s IP addresses to determine that our exchanged traffic is part of a measurement research experiment. To minimize the burden on servers we spread our measurements over many servers within a country, make a single request at a time, add delays between requests, and use a round-robin schedule to maximize the time between trials involving the same server.

FilterMap finds widespread use of filters for censorship. FilterMap’s data analysis phase generated 90 blockpage clusters **in which the blockpages identify either the commercialized vendor that manufactures the filter or the actor that deploys it (e.g. government, ISP, or organization). These filters are located in many locations in **103 countries revealing the diverse and widespread use of content filtering technologies. We observed blockpages in 14 languages. Most blockpages cite a legal concern for blocking access to content. 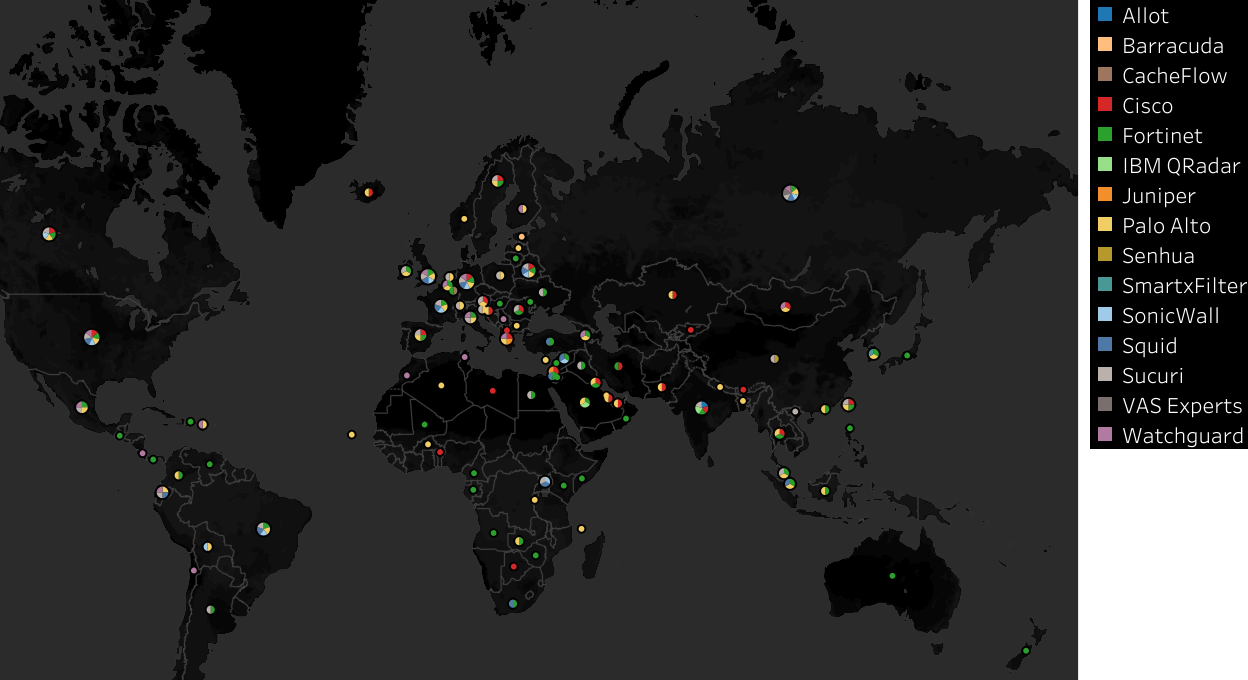 While a small portion of commercial filters are locally manufactured and deployed (e.g. VAS Experts in Russia), most suppliers are headquartered in the United States. The export of these products to countries with poor records in Internet freedom is a cause for concern. We find commercial filters in 36 out of 48 countries labelled as ‘Not Free’ or ‘Partly Free’ by the Freedom House ‘‘Freedom on the Net’’ report. Pornography and Gambling websites are most commonly blocked across all products, followed by websites featuring provocative attire and anonymization tools.

Visit https://censorerdplanet.org/filtermap/results to see in detail the filters identified by FilterMap, their unique signatures, some example blockpages for each filter, and the countries they were identified in.