This post highlights findings from our recent ACM CCS 2020 paper “Censored Planet: An Internet-wide, Longitudinal Censorship Observatory”, where we analyze 20 months worth of remote censorship measurement data collected in 220 countries. Censored Planet finds evidence of increasing censorship in over 100 countries, and we hope that the continued publication of Censored Planet data will enable researchers to continuously monitor the deployment of network interference technologies, track policy changes in censoring nations, and better understand the targets of interference.

Internet censorship, the phenomenon where access to certain websites are blocked, is a global, evolving issue, and therefore should be investigated as such. However, measuring Internet censorship globally and continuously is an extremely challenging problem – Censorship policies are intentionally opaque, diverse in their timings, methods, and targets, and may vary across space and time. Established efforts to measure Internet censorship rely on volunteers or access to machines inside a country of interest, which lead to limitations regarding scale, coverage, continuity, and safety.

A recent line of measurement techniques, called remote measurements, have paved the way to measure censorship more scalably and continuously without requiring volunteers or access to machines in specific countries. These techniques, namely Augur, Satellite/Iris, Quack, and Hyperquack, use side channels in Internet protocols to determine whether two hosts on the Internet can talk to each other, without any control over either of these hosts. We use these remote measurement techniques (which can measure Internet censorship on 6 common Internet protocols - TCP, DNS, Echo, Discard, HTTP, HTTPS) as the base for building the Censored Planet observatory. 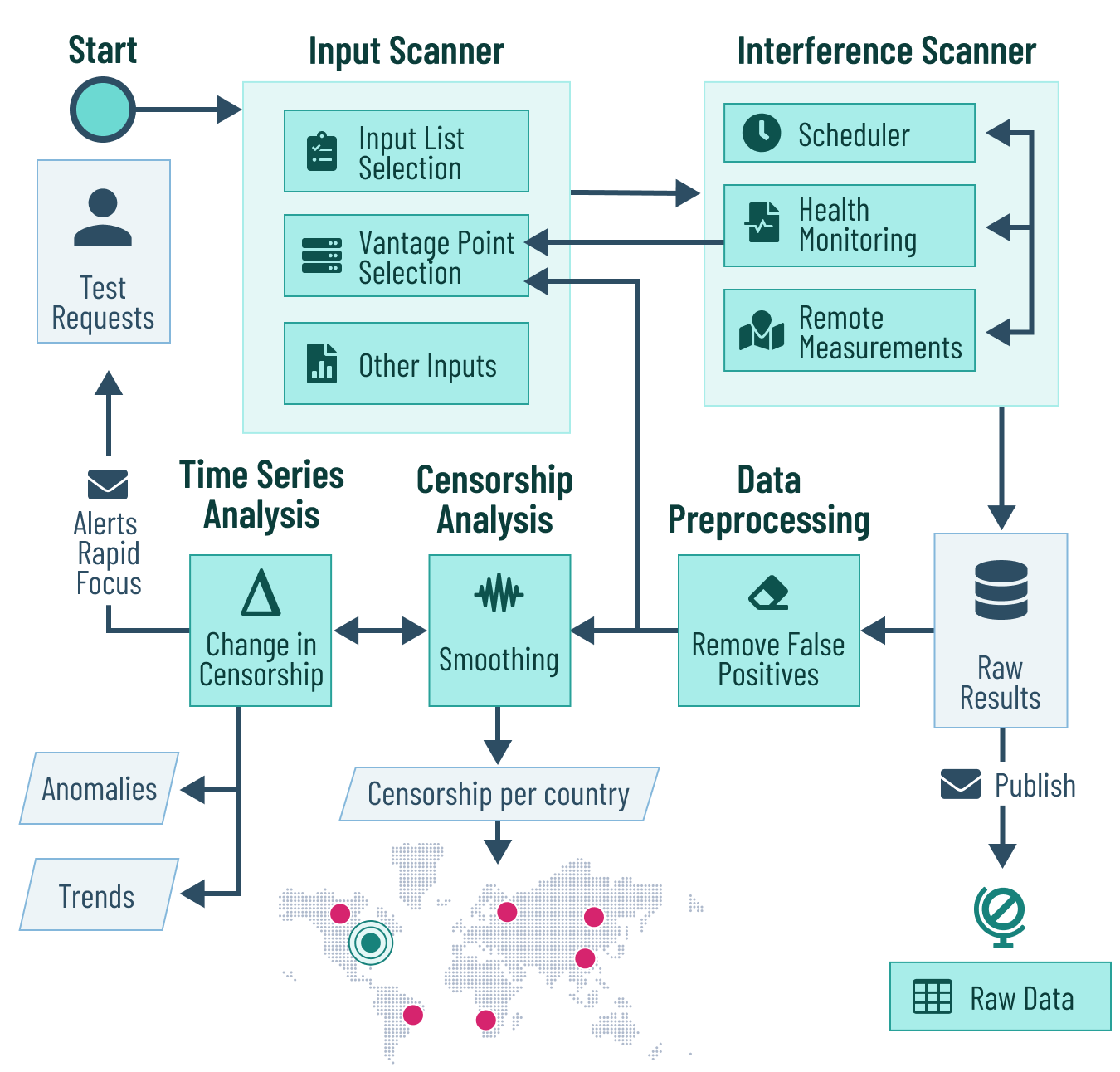 Figure 1. (Left) Remote Measurements from the University of Michigan to vantage points across the world. (Right) Censored Planet’s modular design. 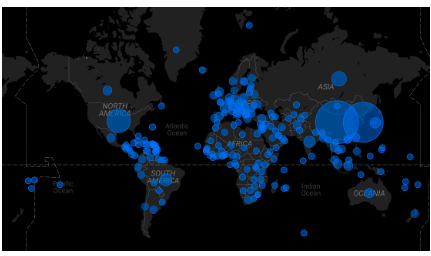 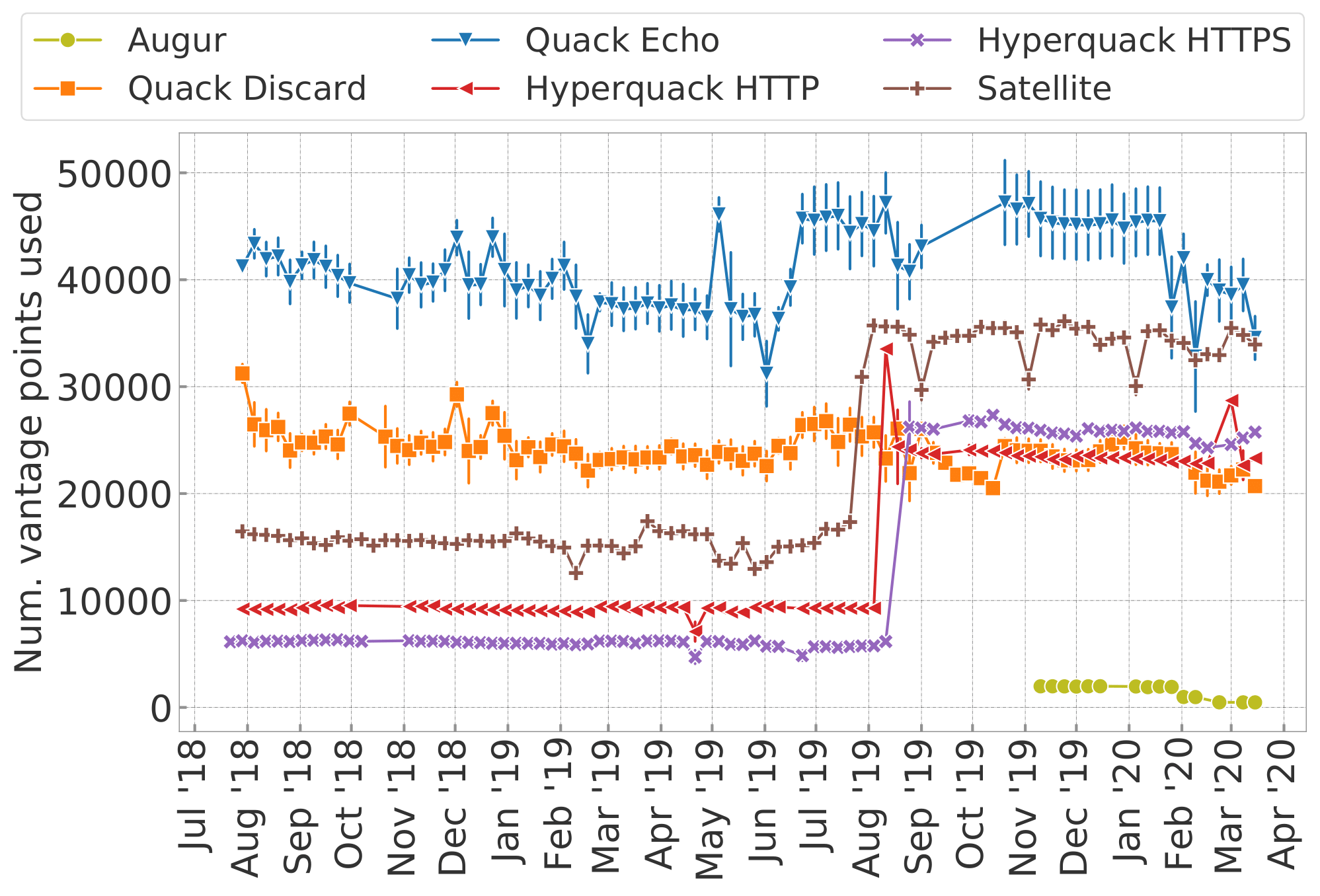 In our ACM CCS 2020 paper, we explore Censored Planet data collected over 20 months (August 2018 - March 2020), during which the platform collected more than 21.8 billion data points. Censored Planet increases the scale of traditional censorship measurement platforms by covering networks in 221 countries (Figure 3 (left)), a 42-360% increase. Censored Planet also offers additional coverage by collecting measurements from a median of 8, and a maximum of 9,000 Autonomous Systems per country, with a median increase of 4-7 Autonomous systems per country. By not relying on volunteers and machine access, Censored Planet can reliably collect repeated measurements from the same vantage points over time (Figure 3 (right)).

Censored Planet detected 15 key censorship events around the world using its anomaly detection method, augmented by manual confirmation (Table 1). Ten of these events were previously unreported. These events lasted for different time periods, and were caused by different censorship methods, showing the need for diverse and continuous measurements. Social Media and News domains were targeted in most events, while Human Rights domains were also affected. While Censored Planet detects increases in censorship around the period of important political and social events, note that it cannot identify any direct connection to these events. It’s also important to note that it’s not always government-mandated network censorship that leads to websites being unreachable, Censored Planet also detects increases in censorship over smaller networks.

We were able to find increasing levels of DNS censorship in more than 100 countries, the highest being China and Turkmenistan. Our findings show that censorship of encrypted traffic is increasing due to advanced deep packet inspection technology, which is a cause for concern. Our trend analysis also found 11 categories of domains being increasingly blocked, including News Media, Provocative Attire, Human Rights, and Gaming domains.

Our results demonstrate Censored Planet’s ability to create a more complete picture of global censorship that is complementary to existing platforms and qualitative reports. We will continue to publish Censored Planet data which will enable researchers to continuously monitor the deployment of network interference technologies, track policy changes in censoring nations, and better understand the targets of interference. Ultimately, we hope that making opaque censorship practices more transparent at a global scale counters the proliferation of these growing restrictions to online freedom.